“All life is an experiment. The more experiments you make the better.” 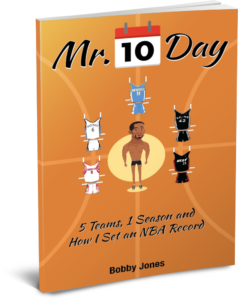 Before Jeremy Lin became a cultural phenomenon with his unexpected rise in the NBA known as “Linsanity” in 2012, there was Bobby Jones, king of the 10-day contract. He’s been called a journeyman, but no one can quite imagine the NBA season which Bobby Jones experienced during his 2007–2008 campaign. Maybe it’s because no one has been through it. Jones played for an NBA-record five teams during the 2007–2008 season: Denver Nuggets, Memphis Grizzlies, Houston Rockets, Miami Heat, San Antonio Spurs. From being teammates with NBA Hall-of-Famers such as Allen Iverson, Yao Ming, Tracy McGrady, Dwyane Wade, Pau Gasol, Tim Duncan to being coached by NBA legends Pat Riley, George Karl, Eric Spoelstra and Gregg Popovich all in matter of five months. Jones finally opens up on what he experienced during that rollercoaster of a season. Jones’ memoir questions, “Does everything happen for a reason?” or “Was this a case of random occurrences?” You be the judge.

Status: 200 pages written so far and looking for literary agent.